Romania may not be the number one choice for a potential visitor to Europe, but at a closer look, the country has great touristic potential.Is not only Dracula that makes people come to Romania (yes Transylvania is a region in Romania).

The country has a unique culture, which was shaped by the historical and geographical conditions in this part of Europe. It’s a Latin country, the language being quite close to Spanish and Italian. Above that, the Romanians had borrowed some of the features from their neighbours: the food is a combination of Levantine with Central European cuisine, the Romanian architecture style is a mix of elements taken Byzantine, Ottoman styles and mansions from the countryside.

But what is more important is the Romanians character: the warm heart from the Latins, the Balkanic way of finding unorthodox solutions to most of the problems and unaltered hospitality, seen better in the rural parts of the country. 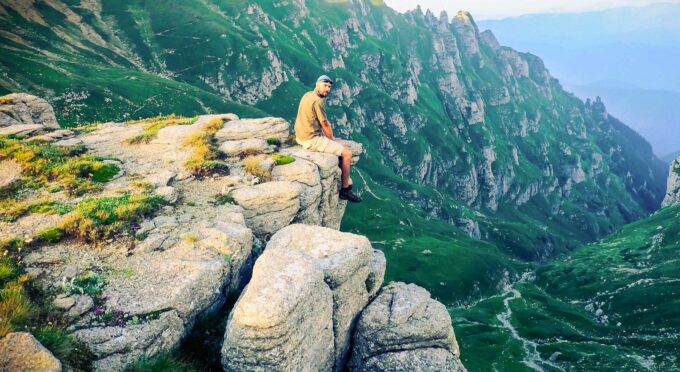 The answer is quite easy. Almost everywhere in Romania. The country is crossed by the Carpathian Mountains, from north to south, and each region offers hiking possibilities at less than 2 hours drive. Even in the lowest part of the country near the Black Sea, where the tourists would normally want to go to the beach or to visit Danube’s Delta one can find attractive hiking routes.

The Carpathian mountains are a mountain range stretching over 1500 km from Slovakia, to Poland, Ukraine and ending in Romania, at the Danube. In Romania, the range is 800 kilometres long and the highest peaks are just above 2500 meters in altitude. The geological formation is ranging from hard crystalline shists, limestone or volcanic rocks. The hiking possibilities are extremely diverse, ranging from easy trails, a few hours long, suitable for beginners and families to long, multi-day treks on the main ridge of the Southern Carpathians.

Having this said, here are our recommendations for the most rewarding easy to medium hikes in the Carpathian mountains in Romania: 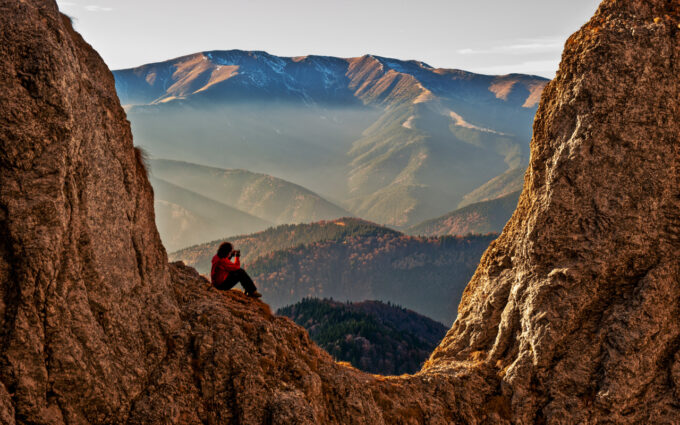 Piatra Craiului is a limestone mountain range, 25 kilometres long, with steep slopes and a narrow ridge that is attracting adrenaline junkies. It is located relatively close to Bucharest (around 3 hours drive), but only a few minutes ride from Bran Castle. Although crossing the main ridge is only recommended to experienced hikers, there are trails that can be followed by any mountain lover. One of those trails starts from the nearby city of Zarnesti, crosses Zarnesti gorges and continues through the forest as far as Curmatura hut. At the hut, hikers can have a warm lunch break before choosing to return on an alternate route.

The returning route can be through a clearing, passing near a sheepfold, or for a longer hike, over the Piatra Mica peak. This hike can be done in any season, although is recommended to hike Piatra Mica peak only when snow is not present. 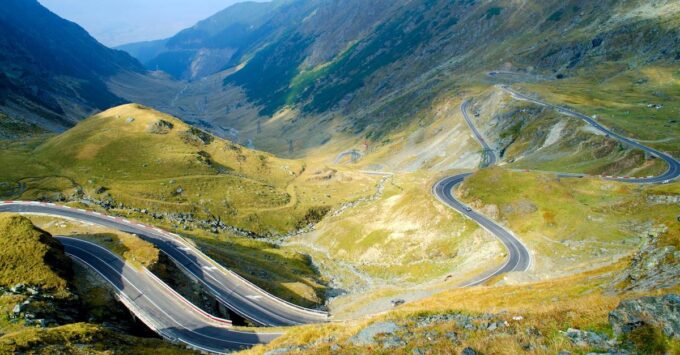 The road itself is one of the main touristic attractions in Romania. It’s almost 90 kilometres long and it crosses the Carpathian mountains from north to south, reaching at its highest point 2000 meters altitude. The road is an engineering masterpiece, laid over the steep and rocky slopes of the Fagaras mountain group. Seen from above the road looks like a giant serpent, folded over rushing streams, scary ravines or marvellous waterfalls. Although most of the tourists are interested in experiencing the road trip on this magnificent road, the Transfagarasan offers numerous hiking possibilities. One of the easiest hikes which someone can do is climbing from 1200 to 2000 m, from Balea Waterfall cable car station to Balea Lake. The trail crosses pine tree and juniper forests, alpine pastures and intersects several times the road. Alongside the trail, one can find raspberry and blueberry bushes, a sweet reward for mountaineers venturing there at the end of summer. But the main reward is the amazing views of the alpine landscape, having in its centre the Transfagarasan road.

3. Trekking the ridge of the Fagaras mountains 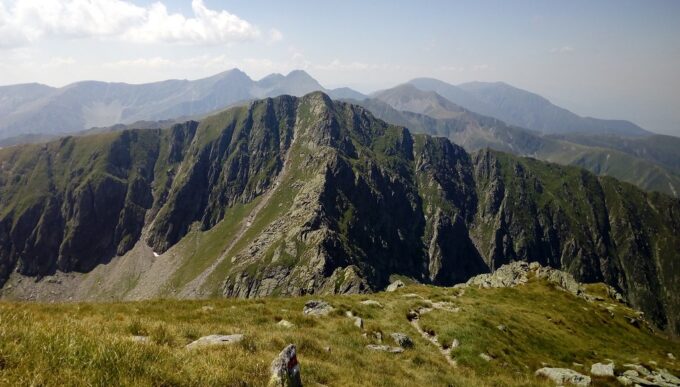 Although not easy, crossing the ridge of the Fagaras Mountains is the ultimate challenge of every Romanian mountain lover. The main ridge has a length of 70 km in a straight line, but with all the ascents and descents, it has a length of about 80 km and involves a total ascent of 5800 meters.

The route of the main ridge covers 8 peaks of over 2500m (one of them being the highest in Romania – Moldoveanu peak – 2544 meters) and the general altitude of the ridge rarely falls below 2000m. This tour requires good organization, favourable weather conditions and good physical condition of the participants. It is recommended to do it in August or September when there are the best chances of good weather. The ridge can be made in about 5 to 7 days, depending on weather conditions and the rhythm of the group. It involves sleeping in the tent on the main ridge, although some mountain huts are close to the trail. Replenishment can be done at Lake Balea, somewhere in the middle of the expedition, but hikers must still carry supplies for 3-4 days with them, in addition to camping equipment.

4. Hiking in the mountain near Sibiu, to experience shepherding in the alpine pastures Shepherding is an occupation that is still done the traditional way, implying the seasonal movement of the flocks from the lower pastures in the spring to the alpine meadows in summer, returning back at the beginning of September. During the time spent in high alpine pastures, the shepherds are living under the clear sky, sleeping in basic shelters, around the sheep enclosures, to be able to react fast in a case of a bear or wolves are passing by. They wake up early every day, before sunrise, to milk each sheep by hand. Then they immediately start preparing the cheese, because up in the mountains, they don’t have tanks to store the milk refrigerated. After the sun rises in the sky, they take their sheep to the nearby grazing areas, returning to the sheepfold a few hours before dawn, for the evening milking.

The sheepfolds and shepherds do not appear on the tourist maps, and even if certain paths intersect the grazing places, it is somewhat difficult for a foreign tourist to succeed in convincing the shepherds to accept them near them, even for a few days. But in order to benefit from this authentic experience, to attend all the activities related to all the operations at the sheepfold and to be able to camp next to them, you need the help of a local guide, who knows the places and the people very well. One of them is Florin Ionescu, a mountain guide from Sibiu, Transylvania, who works in a small local travel agency. 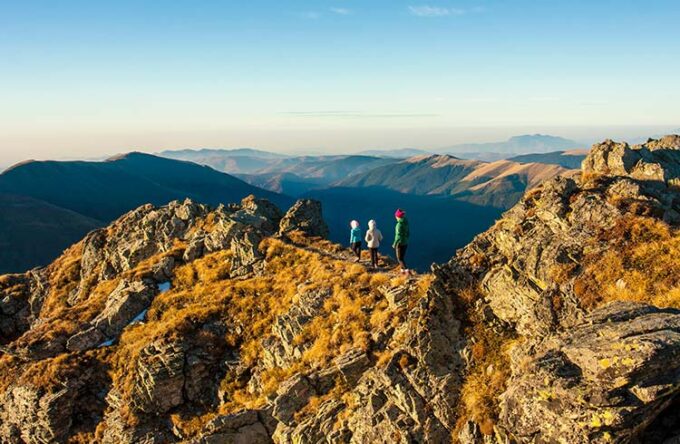 Although the exact number is not actually known, Romania has the largest bear population in Europe. We are talking about the brown bear, Ursus arctos, the largest predator on the continent. Seeing a bear in the wild is a fairly rare event, as the natural behaviour of brown bears is to avoid humans when they sense our presence. Although, in the Romanian forests, the bear’s trails can be easily observed, especially on snow or muddy paths. For tourists willing to see bears in their natural environment, in the Romanian mountains, there are special observatories of wildlife, set up in places where bears usually pass to drink water or to find food. The chances of seeing a bear from those observatories are quite high because the foresters responsible for the observatories leave food near them. Tourists who want to see the bears must follow some rules, so as not to be felt by the bears: they should not use strong perfumes, or not to be sweat, they should stay calm and move slowly in the shelter.