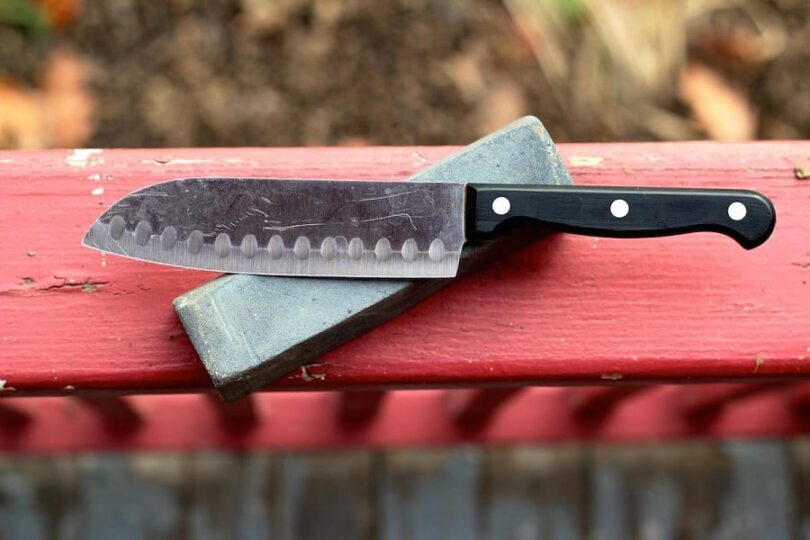 When you are in a survival situation, we can all agree a knife in hand is much better than none. But there is still another thing we all need to agree on – a dull knife (even when it is the best knife in existence) will not be of any help since it wouldn’t hack, chop, slice, or cut. If you happen to find yourself in a survival situation, you will need to rely on a knife. And though you are better off with a blunt knife than no tool at all, utilizing a dull knife will be very frustrating.

If you are fortunate, you might have found it useful to bring a sharpening device with you before finding yourself stuck in the wilderness. In such a case, it will not be of much help if you do not know how to sharpen a knife with a stone. The process of honing your survival knife, pocket knife, or hunting knife’s edge is a relatively easy process. Even so, there is so much that actually goes into honing your knife. For instance, different kinds of steel and grinds require different grits and honing angles.

You will also need to know what kind of sharpener is suitable for your knife. The filed or Bushcraft knives will likely require a pocket sharpener as you will have these tools in the field. To find out the the top knife sharpeners available today, read our article on this for more options. 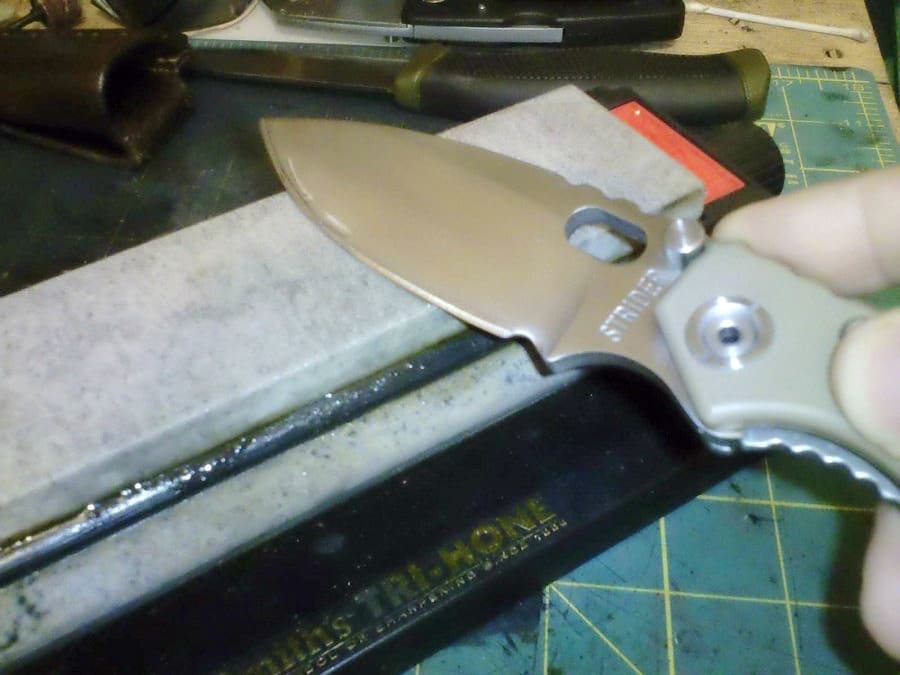 Having the right kind of whetstone is essential when you are out hiking or camping. Getting the best whetstone can be difficult, and this is why it’s important to know the features and tools to look out for.

If you find it hard to differentiate between a Saber and a Flat Grind, an oil stone and a water stone, an Arkansas stone and an India Stone, then keep reading and everything will be explained in detail.

The whetstones are divided into various groups made up of stones which are naturally-occurring and manmade. These include stones such as the Arkansas Oil, Water Stones, and the Japanese Stone. There are also manmade stones such as the silicon carbide (Indian Stones) and the aluminum oxide (Crystalon). 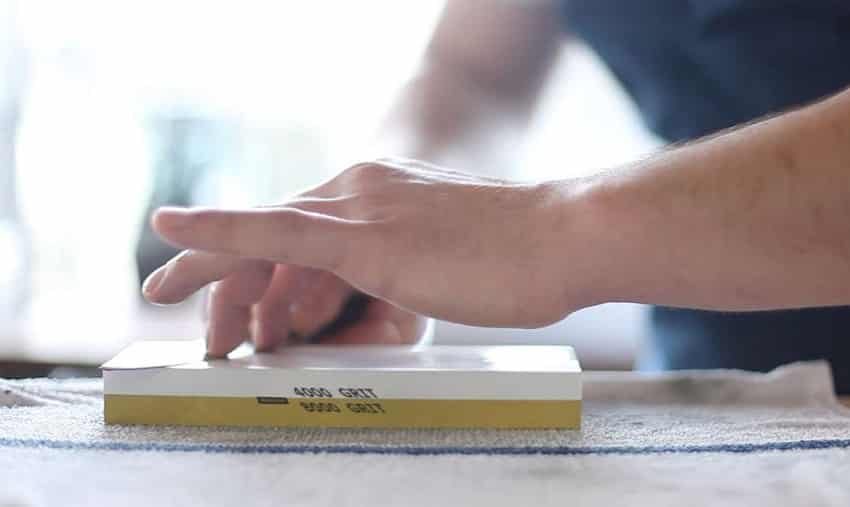 Additionally, there are other kinds of manmade whetstones like the ceramic and the diamond ones which can be used with or without lubrication. Both the manmade and natural whetstones can be found with different grits. The finer grit is less abrasive while the coarser one is more abrasive.

The main reason as to why you need to know and understand these aspects is that different knives with different kinds of blade grinds need sharpening at varying angles so as to achieve the right type of edge.

In addition to that, there are other essential terminologies about survival knife that you would find helpful. For that reason, we can begin by defining a number of terminologies.

It is possible for you to combine grinds or create different variations.

For instance, some blades are flat ground for most of the blade but convex towards the edge.

For instance, knives that have soft blades such as the SK-5 and 1095 ranging from fifty to fifty-five RHC are used for heavy, large, knives with Saber Grinds. Although they sharpen quickly, they undergo the greatest damage on their edges and therefore require the highest degree of repair. 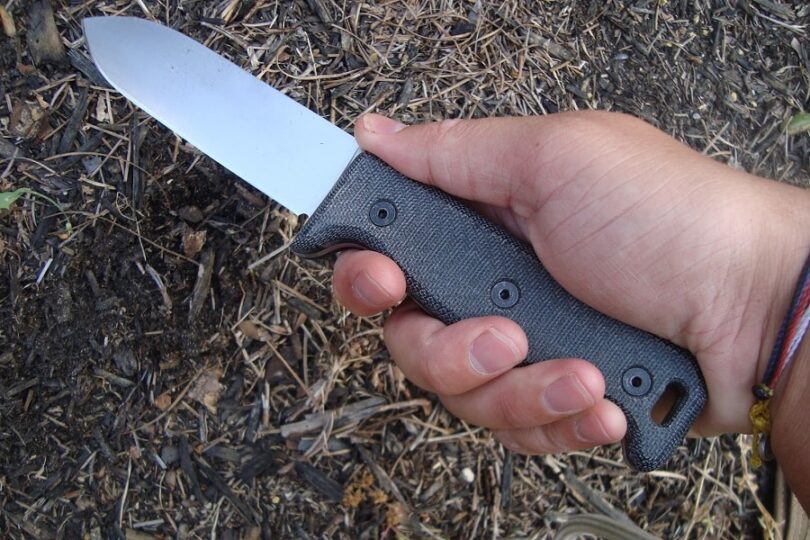 For that reason, when sharpening a blade with a Saber Grinds manufactured from sober blade steel, begin with the coarse grit and then progress using a finer grit. But remember to leave the edge rough as it will easily dull the next time it’s used.

For knives with hard blades such as the ATS-34, 154-CM, or D2 about 58-63 HRC with Hollow or Flat Grinds, begin with medium grit and continue to a fine grit. To find out what’s the best survival knife to stay safe outdoors, see our article discussing this topic.

If the knife has a Hollow Grind with thin Primary Bevel, then you may want to polish its cutting edge with an additional fine grit.

For those who are unfamiliar with these kinds of whetstones, the Japanese Water Stones are excavated in the Japanese mountains.

These stones are made from the ancient metamorphic stone deposits which are made of minute silicate particles suspended in a matrix of clay. As a result, the fine particles these stones tend to produce when sharpening a knife remove the steel easily while polishing the surface of the blade.

On the other hand, the Arkansas Oilstones are found in Arkansas Mountains. These substances come from the ancient deposits of the Novaculite that is believed to be a stone. 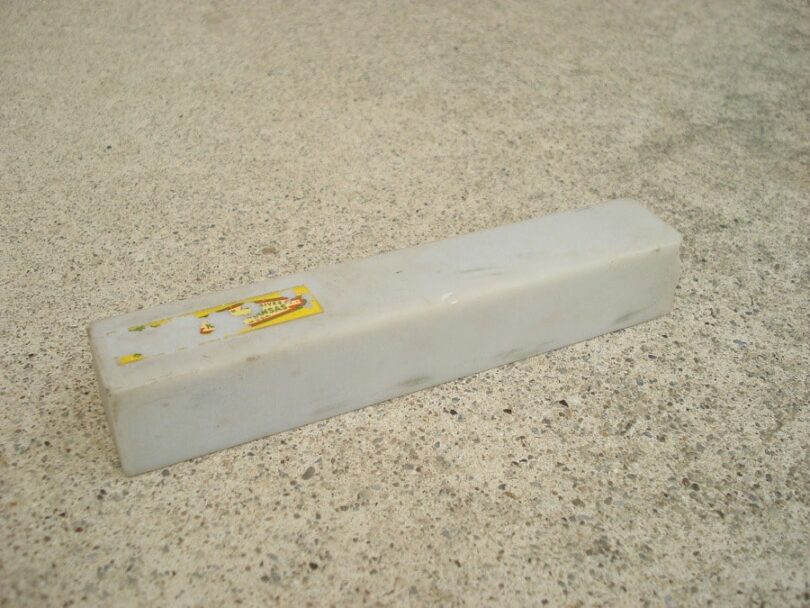 Novaculite produces fine particles when used for sharpening a knife and has the property of removing and polishing steel as well.

Then, there are manmade stones which are made from silicon carbide impregnated ceramic and powdered, industrial grade diamonds which do not need any kind of lubrication. However, despite the type of whetstone you decide to pick, the technique of sharpening a blade is pretty much the same.

Depending on the kind of whetstone you will be using, you may need to use some water or honing oil as a lubricant.

Then you begin by holding the knife by its handle and putting the edge against the stone at a ten to a thirty-degree angle depending on the Primary Bevel thickness, and then move the cutting edge’s length across the stone while maintaining the angle. After that, turn the blade onto its opposite side and repeat the process.

You should continue performing this action, changing sides until the desired sharpness is attained.

Nonetheless, if you are the type of person who finds it difficult to maintain a consistent angle when honing, there are different kinds of honing aids available on the market to help you make a fine edge on any knife blade.

Sharpening A Knife During A Survival Situation

Look for small coarse stones which you will find in rivers. Use a big stone to crush them into pulp. Once they are like mush, get a living wood that is as large as baseball bat handle and strip off the bark. Make the wood wet and rub the pulp around it. 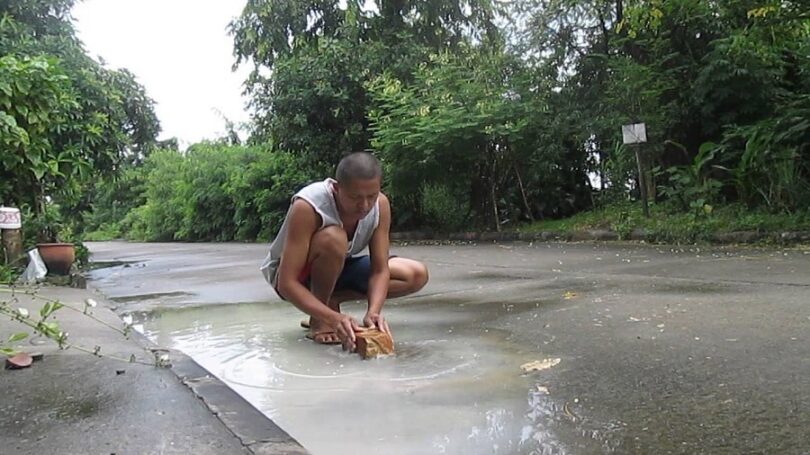 The “contraption” can now act as your do-it-yourself whetstone. Draw the edge of the knife across the piece of wood until you attain your desired sharpness. For you to get the most out of the makeshift whetstone, hold the knife perpendicular to the piece of wood the whole time you are sharpening it.

Use a flat rock

If utilized the right way, a smooth, flat, smooth stone, probably a sandstone or any sedimentary rock, will easily hone your survival blade. The quality of your knife’s sharpness may not meet the levels of a blade sharpened by an actual sharpening tool, but since you are in a dire situation, it is more than enough for your needs.

These stones can easily be found in lakes, rivers, streams, ponds, and under waterfalls. The sedimentary rocks are much preferred over any other kind of stones you will find since the small abrasive particles that make up these stones enable a fast cutting process. To sharpen your blade, slide the rock along the sides of the knife until you attain the sharpness you desire.

To be able to cope up with any survival situation, why not check out our piece on how to be prepared to survive in the wilds.

Stropping is a method used in sharpening the edge of a blade by refining it and smoothening out the tiny burrs found on their edge. 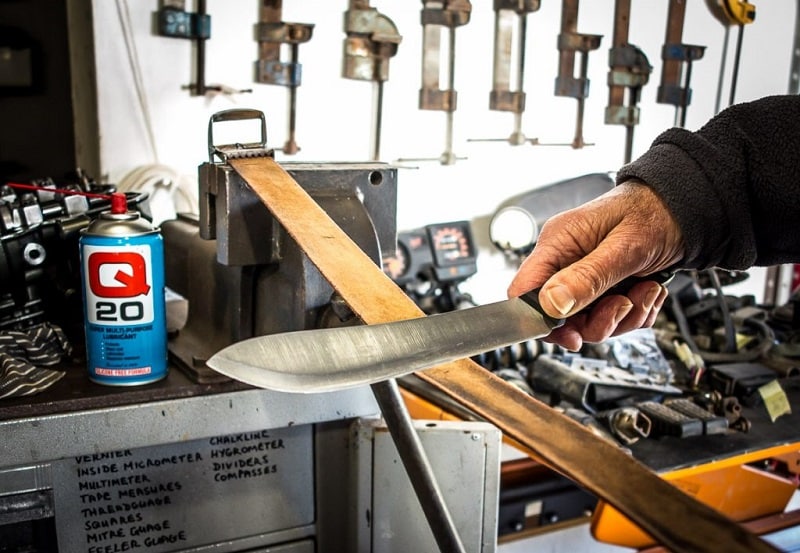 To utilize this technique, you will need a piece of rubber or leather belt. Drag the edge of the blade back and forth on a strop while holding it at a small angle. Be keen to draw the knife away from its cutting edge, so it will not slice or cut the strop while performing this process. If you do not have a leather belt, you can also utilize a boot’s rubber sole as an alternative.

A Step by Step Guide

However, one may argue that even a relatively dull blade can pass the paper test, yet fail at other tasks.

The right test would be to simply use your sharpened knife to prep some vegetable. Is there any resistance? Does the blade fly through the onion? Can you chop a tomato thin enough to see through it? If yes, then your knife is good to go!

As you can see, sharpening a knife is a process that begins with finding the right type of whetstone with the right grit, based on the kind of steel that was used to make the blade and its Rockwell Hardness. 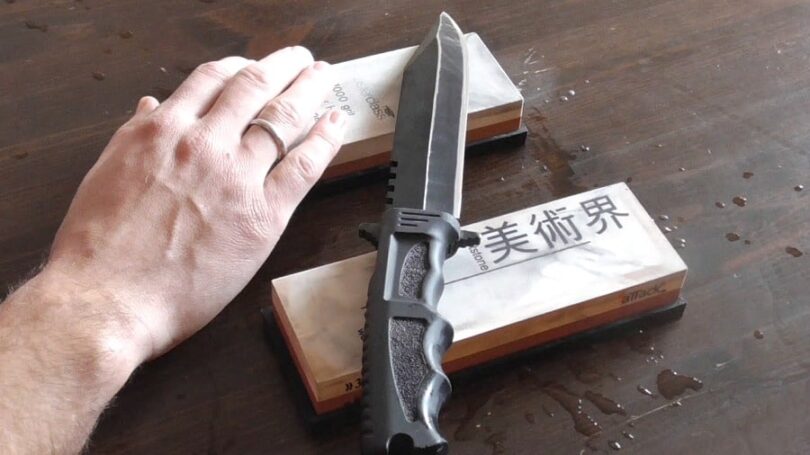 Nonetheless, despite the type of stone you decide to select, the key to achieving an excellent cutting edge is to ensure a constant edge bevel angle is maintained throughout the whole sharpening process. That way, you will be able to get the result you will need to survive while you are outdoor camping or hiking.

To learn additional information on how to sharpen a pocket knife, see our article on this topic.

So did you find this article helpful? Is there anything else you feel should be included in the information provided? Please let us know by posting in our comment section. Also, do not forget to share!